Blood Heat by: Jim Mortimore: The Other Way 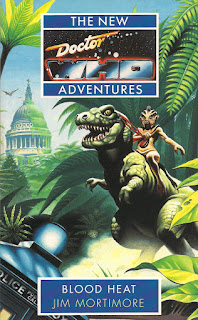 The Silurians have always been an odd villain for me as I really like Doctor Who and the Silurians and The Sea Devils, but I agree with the opinion that Warriors of the Deep is an awful story.  When they returned in the New Series I felt that while I enjoyed The Hungry Earth/Cold Blood, I found it to be a rehash of Doctor Who and the Silurians.  That, along with the new series redesign, is the real problem I have with these characters as the types of stories that you can tell are limited.  So Blood Heat by Jim Mortimore, on the surface looks like it would be another rehash and it is, but it is able to add enough onto the story type to keep it fresh in the same vain as Jonathan Morris’s Bloodtide.

The story sees the TARDIS being dragged into a parallel universe where the difference is that the Doctor died during the events of Doctor Who and the Silurians.  They land twentyish years later after Benny is dragged out of the TARDIS and the TARDIS is lost into a tar pit to find that the Silurians have become the dominant species.  The Doctor and Ace of course meet up with the human survivors to take out the Silurians even though the Doctor wants peace.  So you can see the similarities with the original Silurian story, but the further in you get the more interesting the story gets as Mortimore vividly characterizes the alternate versions of famous characters.

First is Jo Grant who has fallen in love, had a child and become an errand girl for the resistance.  While there isn’t much of Jo in the novel, what we do see is a woman in complete despair as she goes through hell before being murdered for information.  Next we have Liz Shaw who is mainly unchanged to her television counterpart except once the Doctor died her morality began to reflect his even more than before.  She is the one who tries to be a conscience among the madness of this new world.  Her initial interactions with the Doctor are extremely bittersweet as the Seventh Doctor actually shows some human emotion at seeing an old friend pushed to the brink.  Third we have Sergeant Benton who on television was a bit of a dope always but now he doesn’t care if the Silurians die, as long as the human race is allowed to survive.  Finally we have the Brigadier, who without the Doctor has lost his moral conscience and has fallen into insanity.  He is ready to commit genocide to protect himself, going so far as to killing Jo Grant for destructor codes.  Yet you can still see that he is the Brigadier we know by the end as the impression Mortimore writes is that he wants the Doctor to stop him.

Mortimore also does some interesting things with the Silurians.  The society’s division is nonexistent as they are led by Morka, the Silurian who was in control by the end of Doctor Who and the Silurians.  What is great about this is that we see Morka’s regret at killing the Doctor and you find out how much he actually wants peace with the humans but is unable to do so.  While initially the Silurians are villains, by the end of it the tables have turned and it’s the Brigadier who needs to be taken down.  The rest of the supporting cast however aren’t nearly as in depth as I barely remember minus two characters.

The Doctor, Ace and Benny are also brilliant in the novel.  First the Doctor gets some great moments as he has to formulate plans and get it out to Ace without letting the Brigadier know.  He also shows genuine sadness when he sees what happened to his old friends.  Secondly Ace is probably given her best portrayal since Deceit as she feels more like the Ace we know.  She gets her own subplot where she gets to reunite with Manisha who in this universe is still alive and helping with the research for the effort against the Silurians.  She also is paired up with a man called Alan who gives her a great relationship until it is brought to a swift end.  Her sections of then novel are the best bits of the story with some heavy suspense and real joy for once.  Finally we come to Benny.  Now I’ve complained in past reviews about how Benny isn’t used to her fullest potential and it happens again in this novel.  Basically she becomes a plot device and really doesn’t have much impact except for some light relief.

The only other real problem with the novel is that the plot wraps up with peace happening, but the Doctor destroying the Alternate Universe with a Time Ram in the same way The Time Monster concluded which you can see from a mile away.

To summarize, Blood Heat succeeds at evolving a pretty standard plotline above itself by raising the stakes and changing up the characters enough to keep things interesting, while it fails by having a rather bland supporting cast outside of people who have doubles in our universe and eventually wraps up with a bit of a deus ex machina those who have seen The Time Monster will have already seen.  I give it 80/100. 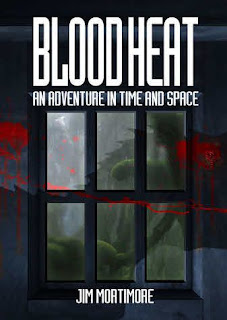 Posted by Jacob Licklider at 2:30 PM