The Devil Goblins from Neptune by: Keith Topping and Martin Day 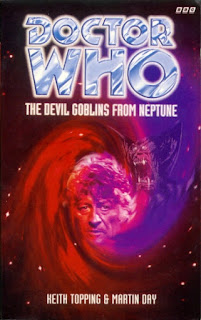 An outrageous title is a double-edged sword: yes it will immediately grab the attention of someone looking through a bookstore and entice them to pick up the book, but if the title is too outrageous the contents of the book will not live up to the expectation of the title.  One such title is the inaugural novel of the BBC Books line of Past Doctor Adventures, Keith Topping and Martin Day’s The Devil Goblins from Neptune, a book with a title that just makes you do a double take and a cover that does not really give anything away about the contents of the books.  Unlike Virgin Publishing’s hand-painted covers by the likes of Andrew Skilliter and Alistair Pearson, BBC Books hired the company Black Sheep to produce digital covers often without input from the author.  The big issue with this is that this is 1997 and Photoshop is nowhere near as advanced as it would become, so the inaugural cover (and many covers to come) is just a red and purple vortex with the face of Jon Pertwee and a crude drawing of a goblin.  It does not really convey anything about the book except that it’s a Third Doctor Novel.  What the actual story is about is Topping and Day’s tribute to the seven episode serials of Season Seven of the show complete with political intrigue, UNIT antics, a bigger plot surrounding aliens, and for an odd reason hippies.


The Devil Goblins from Neptune’s biggest issue is that in emulating a style of a three hour serial in a novel format where you have over 270 pages to flesh out your story.  The issue with this is that the length is almost too long for the story it is attempting to tell.  Between each episode of about three or four chapters in length is an interlude which shows other characters being affected by the events of the novel.  These interludes do not follow characters with any real depth as to who they are or what they want, often being a group of hippies so Topping and Day can reference famous bands of the period.  The hippies are not interesting outside of their interactions with Sergeant Benton who has to infiltrate them, and the scene where the Doctor encounters a van of hippies when escaping kidnapping.  The Russian branch of UNIT as well as a traitor inside the organization (of course being an American infiltrator).  Valentina Shuskin is the operative from the Russian branch of UNIT who acts almost as a one time companion to the Doctor and Liz Shaw during this particular adventure.  As a character, Shuskin makes me at least think of the parallel Liz and her interactions with Liz and the Doctor echo Inferno in quite a few places.  Like parallel Earth Liz, Shuskin is hardened and is not averse to using violence to achieving her goals in life and being part of a plot early on to kidnap the Doctor to get his help.  The one flaw is that by the end of the story, along with a lot of the earlier elements of the novel, she just gets dropped from the events.  This theme of dropping events in the book happens quite a bit, as the Waro (the titular devil goblins from Neptune) only really show up around what is Episode 4 or Episode 5.


This isn’t to say the Waro aren’t good villains, far from it.  Topping and Day write the aliens as these savage beasts who while the Doctor would be for helping them, they’re just too violent and murderous for his help.  Their immediate actions are to rip apart whatever comes in their paths, which is also a double-edged sword: mainly how do they want to invade Earth if they’ll practically rip each other apart?  And their enemies, a species of the classic small grey aliens of the Roswell kind.  The major source of enjoyment from this novel is the excellent fleshing out of the UNIT cast.  Brigadier Lethbridge-Stewart gets his own subplot where he’s attempting to discover the conspiracy inside UNIT is extreme fun, even when he’s talking to a bunch of prostitutes.  Mike Yates as well is essentially the star of the show: he’s in charge while Lethbridge-Stewart is out of action and does his best at his job, but has to be the one who makes the big decisions.  Liz and the Doctor also have a lot of fun, even if this is supposed to be post The Scales of Injustice.  Overall, the start of the Past Doctor Adventures is much stronger than that of the Eighth Doctor Adventures.  8/10.
Posted by Jacob Licklider at 7:08 PM No comments: