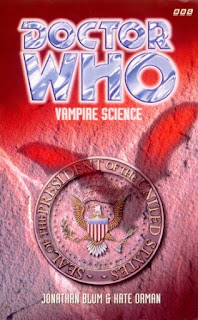 Having six months pass since reviewing The Eight Doctors has given me quite a bit of perspective on the issue of writing for the Eighth Doctor.  The Eighth Doctor is perhaps the Doctor with the largest blank slate when it comes to character development.  His line of novels began publishing in June 1997, one year after the airing of The TV Movie, and the Time War as an effect on the character would only come when the series was revived in 2005.  All we get is that he’s a hopeless romantic who gets amnesia when he regenerates and during The Eight Doctors picks up companion Samantha Jones for a series of travels.  Terrance Dicks focused on a celebration of continuity for his novel, but this leaves Eight and Sam as a blank slate.  We know that Sam Jones is a vegetarian and liberal activist living near enough to Coal Hill School while having an overactive sense of justice.  Vampire Science is the follow up novel and actually gives us the start of the Doctor and Sam’s actual travels.  The biggest problem of the novel is Sam Jones: as a character she doesn’t come across as likable, but is written in this style where she’s just all snark and no care.  It seems that the people running BBC Books were attempting to follow the formula to make a companion like the smash hit Bernice Summerfield, but she really doesn’t.  Sam’s obsession is saving the planet from pollution and attempting to rebel against parents who would only dislike her if she became a drug addict or dared to join the Conservative Party.  She’s a whiny teenager who thinks that everyone should be the ones treating her like an adult and going with the Doctor she can prove it.  Sorry, but that’s not really a well-defined character overall and she’s really the only thing getting in the way of this being a great novel.


Vampire Science is written by Jonathan Blum and Kate Orman.  Kate Orman is perhaps my favorite writer of these Doctor Who novels or is at the very least one of the greats.  Her novels may not always have the most plot driven stories, but tonally and thematically they are always rich and provide hours of contemplation.  Vampire Science is of course no different here as the plot deals with Carolyn McConnell, an oncologist who’s deepest desire is to find a cure for cancer.  Carolyn stumbles upon a group of vampires in the 1970s where she is saved by the Doctor and Sam, before we flash forward to 1997: vampires start attacking again and after her boyfriend is kidnapped, she has no choice but to call the Doctor for help.  Perhaps the greatest theme of this novel is that of the existential dread of death and the insignificance of life in the world.  Carolyn is a woman who retreats into despair with the Doctor on his way, yet when her eyes are opened to the possibility of a wider universe she can only become intrigued.  Carolyn is definite companion material and in all honesty she would work much better than Sam.  She has this great dynamic with the Doctor, a lasting image of the novel being Carolyn waking up to the Doctor in her kitchen making breakfast.  Her boyfriend is kidnapped and there is a coven of vampires, but this man can make the entire world better, can give poor Carolyn hope, by making breakfast and forming a plan of action.  He opens the door and she follows, she’s strong enough to save James and even attempt to save the vampires.


Joanna Harris, the leader of this vampire coven, a woman who has been living for nearly a millennium.  A woman who spent centuries attempting to develop a cure or a potential substitute to satiate the hunger of the vampires and a woman who has been manipulating humans into joining her.  Harris leads men and women metaphorically to the edge of a cliff of despair, slowly over the course of months, even years, and then offers them a choice.  They have been brought to their lowest point and have nowhere left to go but over the edge, suicide is the only option.  Except it isn’t.  Joanna Harris gives them a choice, they can become a vampire and join her or continue living their lives, knowing full well that suicide is what awaits them if they do.  The Doctor still wants to help her find the cure, he wants to gain her trust because he doesn’t want to see a war between the humans and the vampires.  The Doctor doesn’t like needless bloodshed and even though they have killed countless people and are mortal enemies of the Time Lords, he is going to help them.  He goes so far as to set up a psychic and physical link between the two as a show of good faith and trust, something both parties betray over the course of the novel.  Harris’s latest victim is one Dr. David Shackle, an emergency room Doctor in a low income area of San Francisco.  A man who cannot come to terms with death and the inevitability of being forgotten.  He spends much of the book attempting to be a big help, but once Harris makes her offer he finds himself unable to refuse and the final page of the novel ends his story.  He is perhaps my favorite character of the book due to the intense despair he feels.


Like any piece of science fiction, Vampire Science remains topical through themes about immortality, this time through the younger vampires.  Our chief example is Slake, real name Edwin Pratt, a young vampire who is itching for war, itching to cause chaos because he’s young and needs a cause to fight for.  Blum and Orman craft a message about when it is right to take action: people always want some injustice to fight against and as those injustices get smaller and smaller as humanity gets better and better, fighting gets worse and worse.  It hasn’t changed since the dawn of time and people always try to find a cause.  Sam has her cause, Slake wants a cause, Shackle lost his cause, and Carolyn found hers again after it became routine.  Cause and effect is perhaps the best description of this book.  9.5/10.
Posted by Jacob Licklider at 2:56 PM No comments: