The Naked Time by: John D.F. Black and directed by: Marc Daniels: You Will Leave With My Blood On Your Sword 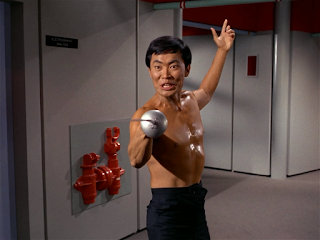 “The Naked Time” was written by John D. F. Black, was directed by Marc Daniels, was produced by Gene Roddenberry, held production code 7, was the 4th episode of Star Trek Season 1, and was broadcast on 29 September 1966.

Certain science fiction tropes have run their course and died.  The plague from space is one that was quite popular in the era of the Cold War, with the Space Age bringing the fears of diseases from the stars that humanity would not be able to combat.  The trope is an old one, drawing on a universal fear of the unknown and is a contributing factor in the early success of science fiction such as the famous Quatermass serials, novella Who Goes There?, and 1970s Doctor Who serial The Ambassadors of Death.  “The Naked Time” is one of those episodes of Star Trek where the writers are pioneering a trope and one that will remain in the public consciousness for a very long time.

The crew of the Enterprise have come to the planet Psi 2000 which is an ice planet that is about to die and a research team has not contacted the Federation for months.  Standard setup for an episode of Star Trek, and it is in the setup where the failures of the episode rear their ugly head.  In investigating the research base, Spock and two random crewmember’s (they’re names aren’t important) beam down and one of the crewmembers makes the mistake of taking off his protective gloves and touching things.  This is the kickstart to the plot as we have an exploration of what could have caused the deaths of everyone at the research station, found in positions such as working, showering with clothes on, lying down, etc.

This only gets us about fifteen minutes into the episode of course so the infection of our resident “red shirt” causes him to become irritable, attack Helmsman Sulu played by George Takei and some random Irish crewmember, and suddenly die.  Of course, this is cause for alarm as Sulu decides it’s a good idea to take a rapier and begin challenging people, shirtless, to a duel and the Irishman takes control of the ship, because he can do that apparently, and sing…very badly.  This is where the big twist on the disease comes in as it essentially makes people have a form of high energy intoxication.  It doesn’t kill them, but because the Irishman has taken control of the ship and as previously stated, the planet below is dying, here’s where our tension comes in.  The tension holds through the episode and it mixes extremely well with the absurdity of the performances.  George Takei gets an award for most flamboyant swordsman, while people are cackling like asylum inmates, flirting with women, and offering people cake, a swordsman is the most out there aspect of this because it’s obvious Takei is enjoying himself which helps the performance.

The standout however is when Mr. Spock is infected and becomes the opposite of his emotionless self.  That means of course that he becomes extremely emotional and gives a powerful speech about his problems with his family before snapping back into genius mode to save the ship.  Leonard Nimoy deserves an award and seeing him bitch slapped not once, not twice, not thrice, but four times by William Shatner.  The ending manages to bring the episode back to reality and ends on a note of uncertainty for the future: the crew has discovered time travel and is not opposed to using this in the future, with caution.  The final shot shows how great the direction of this episode was.

To summarize, “The Naked Time” is one of those episodes that uses a trope to its advantage with a stellar cast.  Its base is not the strongest, but the performances are stellar and go close enough to the top, without going too far over.  Shatner and Takei are the exceptions of course as they just let it all blow over into a masterpiece of campy goodness.  The direction knows just how to end the episode with a feeling of uncertainty for the future, almost acting like a real ending to the show possibly, even though it is four episodes in.  90/100

Posted by Jacob Licklider at 8:24 PM No comments: