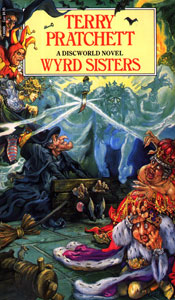 Ah, Shakespeare, one of the greatest writers of all time famous for plagiarizing a bunch of famous stories and turning them into plays that will be the bane of high schoolers everywhere.  I personally have always had a soft spot for the Bard of Avon and it seems Terry Pratchett does as well.  Wyrd Sisters, the sixth Discworld novel, takes its cues from Shakespeare’s Hamlet and Macbeth to craft a story about the death of the king of Lancre, cat-hating ghost much to Death’s annoyance, murdered in cold blood by his own brother the Duke and the scheming wife.  Pratchett’s story overall presents itself simply, working more as a character piece than any real plot.  Sure there are plenty of jokes cracked at the Bard’s expense, with flowery language and ripping off of history and famous stories galore, but mostly it’s the characters.  Alas the King was a sensible king overall and he gives his son, not yet named, to three of the psychically inclined, our three wyrd sisters, three witches of the title.


Yes the three witches are our protagonists for the novel as they form a sort of coven.  First is returning Granny Weatherwax, again resuming her role from Equal Rites as kindly, yet extremely stubborn, old woman.  With one foot always stepped in the past, she doesn’t like the idea of a coven or curses or unnecessary harm to people, but make her angry and you’re going to regret it.  I hear being a toad can be quite nice, but not everybody is so amphibiously inclined as others.  Granny is also ever the traditionalist, not really being able to see the reality of the world around her, refusing to admit that she could potentially be lost, and witches should not be interested in *gasp* men.  She has this air around her that she thinks so highly of herself that she’s almost wrapped right around to the lowest of the low levels of self-confidence.  She’s the one character who really doesn’t develop much and that’s all a part of her charm. 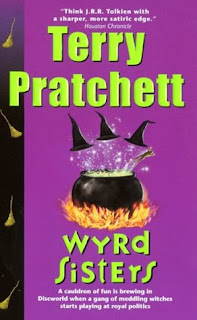 The other two witches are foils to Granny Weatherwax in their own ways.  Nanny Ogg is the older of the two, a mother of fourteen children who all adore her, and a grandmother of, well I don’t actually know.  She’s also got a demon cat and seems to know how to cook.  Yeah her character works in the fact that it is simple.  She’s sort of that fun uncle that everyone has and the scene where the duke ‘tortures’ her is really the highlight of the book.  She’s got to be Magrat Garlick’s mentor after her old mentor Goodie Whemper, not appearing in this novel, died and because Granny Weatherwax is such a traditionalist that poor Magrat is really naïve.  The thrust is that they have to take care of the prince whom they call Tomjon and give to a bunch of actors.  Magrat Garlick is kind of a hippie overall and she doesn’t really understand sexual attraction or love which is of course hilarious, and she ends up actually having a decent relationship with the Fool, who also becomes the King because he’s the bastard of the previous king so is crowned Verence II.  Their relationship is never really explained by the end of the novel and I cannot tell if that’s because Pratchett is being confusing like Shakespeare or just doesn’t know what he’s doing with the novel.  Tomjon’s fine with it because he’s an actor now and his friend William Shakespeare, I mean Hwel, build a theatre in Ankh-Morpork called the Dysk.  Yeah this one’s just a bit too odd, but in a pretty good way where it doesn’t quite make sense, but hey that’s a lot of Shakespeare. 9/10.
Posted by Jacob Licklider at 2:14 PM