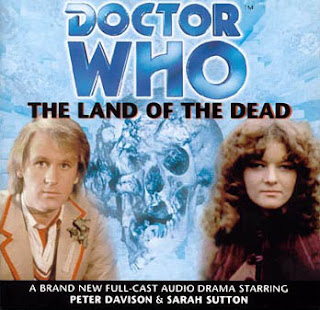 The Land of the Dead stars Peter Davison as The Doctor and Sarah Sutton as Nyssa.  It was written by Stephen Cole, directed by Gary Russell and released in January 2000 by Big Finish Productions.


As an introduction to the Fifth Doctor/Nyssa Audio adventures, Stephen Cole's The Land of the Dead shows its first problem if you buy the CD. The notes from the author say he wrote the story in just a week, which can be taken either as the author wrote it last minute or couldn't get any ideas for a story.  This makes you lower your expectations to a story with an interesting title and description.  Yet I remained optimistic as City of Death was written in a very short period of time and is one of the best Doctor Who stories out there.  Of course Big Finish did strike gold in deciding to take stories set in the gap between Time-Flight and Arc of Infinity as when Season 20 came around something did feel distinctly different about the dynamic between Nyssa and the Doctor.  I am also biased as Nyssa was my favorite Fifth Doctor Companion and I hated it when she left in Terminus so just to have her back is great and for it happening so early on.

The plot involves the Doctor and Nyssa going to a mansion in Alaska owned by a rich oil tycoon who transplanted land where they are attacked by dinosaur-like creatures that can evolve by eating living matter.  A premise working with the theories of evolution sounds like something out of Ghost Light and makes you wonder if there is any connection between the monsters in this story and Josiah Smith, Control and Light from that story.  Sadly that aspect of the story is barely touched upon instead focusing on the characters, which I wouldn’t have any real problems with as character drama can be great.  Sadly with the time constraints that Stephen Cole had on writing this story the characters are underdeveloped to an extreme degree with an already weakened story.

The premise should make for an interesting story with an unstoppable threat that learns with every kill.  That description should make them terrifying but the sound design doesn't do its job in creating a good atmosphere.  The story takes place in Alaska which is the perfect place to have blowing snow and cold temperatures.  It really feels rushed or Nicholas Briggs is being overworked in doing the scores for the first four audios.  There are also problems with the way Nicholas Briggs decided to design the audio for the villains.  Now the villains are mainly skeletons of giant dinosaurs, but somehow they don’t make a lot of sound as the music goes quiet so dialogue can be heard.  It becomes really noticeable in the long run considering how dragged out this thing is.   The plot drags on across the four episodes and could easily be shortened to two episodes which would have helped, but Cole pads it out with some Native American legends that don’t really need to be there and some truly boring characters.

The acting in this story is also very hit or miss. Peter Davison, Sarah Sutton and Lucy Campbell give standout performances in the midst of a bore of a story.  Peter Davison and Sarah Sutton continue their great repartee with each other as two very alien characters going to Earth, even though Davison’s Doctor is still a very human portrayal of the Doctor.  Lucy Campbell plays Monica Lewis who is working on this expedition in Alaska and pretty much serves as the American Tegan, always complaining, yet is still a very smart person.  She helps provide a lot of what makes this story enjoyable.  The other characters, and the actors that portray them range from okay to bad.  Christopher Scott as Brett is your standard human Who villain but doesn’t really stick out much from the other villains.  Neil Roberts as Tulung tries to have an interesting subplot but that doesn’t really do much to develop character as he doesn’t really change except he accepts his heritage after a rather weak crisis of faith.  Everyone else is really quite forgettable in the story.

To summarize The Land of the Dead, is a complete bore of a story that, like the others from the early monthly range, shows a lot of potential for great things but never really gets off the ground.  It is by far the worst story from these early releases with bland characters, a really bad story and some truly awfully placed sound design.  For his first foray into Big Finish Audios, Stephen Cole's The Land of the Dead gets a 30/100.

Posted by Jacob Licklider at 5:20 PM