The Fearmonger by: Jonathan Blum directed by: Gary Russell: We Didn't Start The Fire 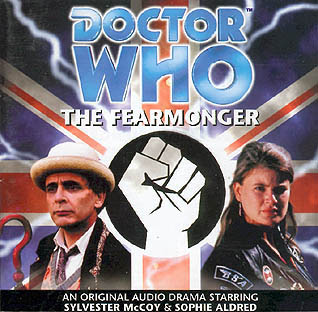 The Fearmonger stars Sylvester McCoy as the Doctor and Sophie Aldred as Ace.  It was written by Jonathan Blum, directed by Gary Russell and released in February 2000 by Big Finish Productions.

Now over the last four Big Finish monthly range reviews I have said how much potential the stories actually had, but how little of that potential is actually used in the stories that were released.  Well good news Whovians as Jonathan Blum’s only Big Finish story has the graces of fulfilling almost every idea that it introduces to some extent.  This story officially marks the turning point where the releases following became more and more solid with a few stories here and there being clunkers as there is with any output of stories.  Blum takes an approach to the story established by the Virgin New Adventures by creating an almost natural progression to the levels of darkness and manipulation that the Doctor does in the story.  The plot of this story involves the Doctor and Ace investigating the new Britannia where it is election year and the most prominent candidate Sherilyn Harper, played by Jacqueline Pearce.  All isn’t well as the time travelers are chasing a creature that feeds on the fear of others causing people to have acts of terrorism and attempted assassination.

The story is a complete political thriller and it succeeds with this.  It basically takes the most interesting aspects of Whispers of Terror and elevates those elements to perfection.  Pearce is a brilliant performer as you are never really sure when it is Harper or the creature talking as only Paul Tanner can hear it and he is slowly breaking down.  The tension continues to ramp up as the story continues until it climaxes in a warehouse where everything is revealed yet you never get a full explanation about what the creature is and where it came from.  That works best for the story as you are given just enough to have the ideas of what the creature is and you know how far it can make people go in obeying it’s hunger for the emotion of fear and chaos.

The acting in the story is top notch with Sylvester McCoy being much better than he was in The Sirens of Time as he doesn’t have to put much effort into being the manipulator.  He knows exactly what notes to hit to make the story work and continue to keep you guessing on what the creature is doing.  Sophie Aldred returns of course as Ace and her voice acting is probably the best of the returning companions as since her Doctor Who days she has taken numerous voice acting roles for children’s television which can really build up her set of skills.  The character of Mick Thompson, played by Sophie Aldred’s husband Vince Henderson, is great at bringing on the social commentary of the story about how warped the media can get.  Thompson is a reality radio host who is pretty much a giant troll.  The commentary continues to be relevant to this day and the story just improves with age as we have an internet culture where anyone can troll and terror threats are very real.  The music of the story also really pops as it sounds very much like music from the 1990s and the sound design really makes some of the dizzying moments of the story pop out.

The real shame of the story is that there are just a few acting hiccups that happen throughout the story.  They rarely come up but when they do, they really pop off in a stellar production from Big Finish.  Another shame is that Jonathan Blum only wrote this story for Big Finish as there was a lot of production problems with this story and the way Blum was treated wasn’t very good for him so he decided to leave Doctor Who in general after his BBC Books run.

To summarize The Fearmonger is the first story to fulfill its potential as a story and shows exactly what Big Finish can do when they are on top form.  The acting, writing and social commentary is perfect with the only problems being some little hiccups that happen every once in a while.  90/100.

Posted by Jacob Licklider at 6:46 PM