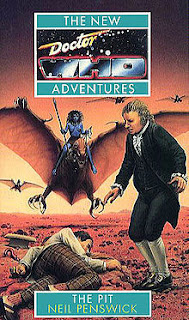 I have heard that The Pit is the worst of the Virgin New Adventures and while I cannot confirm this fact as I’ve only read up to The Pit, I will confirm that it is definitely the worst novel so far.  This is Neil Penswick’s only novel and after a Google search I cannot find any information on this author’s other work.  His page on the TARDIS Wikia only says that he wrote The Pit and nothing else about him.  Judging by the way The Pit is written I wouldn’t be surprised if this is the only thing that Penswick actually wrote as it has no sense of how to tell a good story.  The sentences are extremely short and they don’t flow from one to another.  The characters are generic with two being basically the same character with two different names and the plot is no more than a lot of random events strung together by threads.

I recently saw an anime review by Glass Reflections where a point was made that the events of a story should be connected by the words but and therefore, not the word and.  This is because it indicates conflicts and solutions to those conflicts while the word and makes events unrelated, yet connected for no reason.  To exemplify this I’m going to compare the basic plot of this novel to the plot of An Unearthly Child Part One.  The plot of An Unearthly Child goes like so:

Without giving too much away at once, The Doctor and Benny go to a planet and there is an experiment going on and shapeshifters and poet William Blake has been teleported and the Doctor and William Blake get transported into a parallel dimension and Benny meets some androids and there is a research team and a guy who may be the Tenth Doctor if you subscribe to a fan theory and a Time Lord called Kopyion and the planet explodes and everyone dies.  So you can see exactly how nothing is really connected and the plot just sort of happens and resolves itself with any involvement from the Doctor.

No the real hero of the story is Kopyion who is a Time Lord who really is the only person to have anything to do with the plot.  He is supposed to be what the Time Lords were in The War Games but is really just a Mary Sue.  He does everything to perfection and doesn’t seem to have any flaws to his character.  He created the entire situation of this planet and these shapeshifters performing experiments on people for no real reason.  He doesn’t want to trap the Doctor or anything and doesn’t have any clear cut motivations and doesn’t even know what he is trying to do.  This is the same for all the characters as none of them have any clear cut motivations for what they do.  The only motivation I can think of is survival of the fittest, but that was done a lot better in Survival with Ace’s friends because they had personalities.  There are even two androids who serve the same purpose and when one ends up dying the other takes over.  This is until the other one that was dead comes back to life near the end for no real reason except to moan about slowly dying.

Bernice Summerfield also gets the bad character treatment as she is basically a nonentity in the story, contributing very little to the plot except getting the Doctor to go to these doomed planets to begin with.  It hurts even more considering the opening pages with the Doctor and Benny musing over the little ideas that popped into Benny’s head getting them to the planets.  Once they get to the planet the thread to the plot is dropped out of the blue which is when Benny becomes irrelevant for the rest of the plot until the very end when she becomes the only person talking sense when the Doctor assists in genocide on the planet with Kopyion.  And that is something that even on his darkest days, the Doctor would never do.  While I’m on the subject of the Doctor, the way Penswick writes for him is unrecognizable as the Seventh Doctor.  He feels like a poor man’s version of the Second or maybe even Third Doctor for most of the run time and has nothing to do.

Classic British Poet William Blake also appears in this novel as a pseudo-companion to the Doctor, but he is also a non-entity and takes up even more space in a crowded novel.  All in all I have to give The Pit a 5/100 as it is an absolutely worthless novel that only has a few pages in the TARDIS that are easy to read.  It is really going to be difficult to surpass this novel, but who knows if that’s going to happen.
Posted by Jacob Licklider at 6:40 PM