Probably Not the One You Were Expecting #1: Love and War by: Paul Cornell adapted by: Jacqueline Rayner directed by: Gary Russell 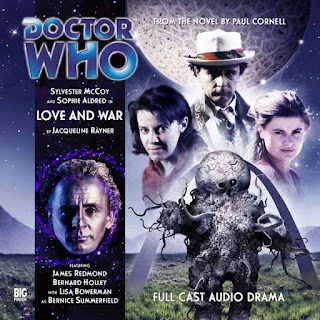 Before I begin this review let me preface this with the note that it will be a miniseries on the adaptations of Doctor Who Novels.  They will have a product information at the beginning of them and will not necessarily be my 500 word minimum, but no less than 250 words.

Love and War stars Sylvester McCoy as The Doctor and Sophie Aldred as Ace with James Redmond as Jan Rydd, Bernard Holley as Brother Phaedrus and Lisa Bowerman as Bernice Summerfield.  It was written by Paul Cornell, adapted for audio by Jacqueline Rayner, directed by Gary Russell and released in October 2012 through Big Finish.

The audio adaptation of Love and War is interesting in that it is Big Finish’s first real foray into the territory of the Virgin Novels that include the Doctor.  Yes they adapted the novels Birthright and Just War as audio dramas with Bernice Summerfield deleting the Doctor from the story, but those novels were Doctor light anyway.  To celebrate the 20th anniversary of the character, Big Finish decided to adapt the first appearance of the character originally written by Paul Cornell into a full cast audio drama.  Jacqueline Raynor did the adapting into audio form and she really knows how to adapt.  There are very few differences in this adaptation from the original novel.  The main one is toning down the romance, which works for the best as the Big Finish audience does range from really young to adults and cutting out the military and library scenes.  While I liked those scenes they could easily have been cut from the novel.  The introduction of Jan is slightly different as they really couldn’t do it on an audio format.  The relationship between Ace and Jan isn't even toned down very much, but is just less explicitly stated.


What the audio drama does even better is the reaction of Ace to the Doctor’s manipulation as Sophie Aldred’s emotion can’t really be felt as much in writing.  The audio also adapts the Doctor Who Magazine Prologue which is also great as it brings back Charlie Hayes back to play Death.  The Hoothi are also even more graphic as you hear the squelching and explosions of the fungus.  Christopher is probably the best he could ever have been, they have him played by a woman, but her voice was pretty deep and was digitally altered to sound more emotionless, as Christopher can't really feel love or many emotions.  He is on a higher plane of psychic existence so it makes a lot of sense to be more emotionless.  This is definitely the superior version of the novel, and if you can’t find the original novel for a good price then purchase this from Big Finish as it is just as good as the original novel.  I have to give it the same rating I gave the novel, a 100/100, as it hits the right notes as the novel and even does things better simply because of its medium.
Posted by Jacob Licklider at 9:03 PM