The Tomb of the Cybermen by: Kit Pedler and Gerry Davis directed by: Morris Barry: You Belong to Us, You Will Be Like Us 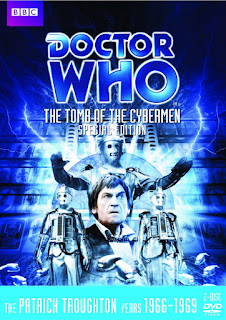 The Tomb of the Cybermen stars Patrick Troughton as the Doctor, Frazer Hines as Jamie McCrimmon and Deborah Watling as Victoria Waterfield with Shirley Cooklin as Kaftan, George Pastell as Eric Kleig, Michael Kilgarrif as the Cyberman Controller, Hans de Vries, Tony Harwood, John Hogan, Richard Kerley, Ronald Lee, Charles Pemberton, Kenneth Seeger and Reg Whitehead as the Cybermen with Cybermen voices by Peter Hawkins.  It was written by Kit Pedler and Gerry Davis and directed by Morris Barry with Victor Pemberton as Script Editor and Peter Bryant as Producer.  It was originally broadcast on Saturdays from 2 to 23 September 1967 on BBC One.

The Tomb of the Cybermen has an interesting history with fans.  Until being found in 1992 in Hong Kong it was one of the stories that were completely missing and only heard about from the novelization and the word of mouth surrounding the story.  The word of mouth said that this was among the best of all Doctor Who stories with enormous sets and some of the best acting ever seen in Doctor Who.  The hype allowed the BBC to immediately release it on VHS to the fan reaction that it was good, but not nearly as good as some of the other Doctor Who stories and that the people who said it was a classic were seeing it through rose tinted spectacles.  I’m here today to see if the story really was as bad as people reacted to it.

The story is the opener to Season 5 also known as the base under siege season so called for the style of story produced around the time.  The Tomb of the Cybermen is no different as it sees the Doctor, Jamie and Victoria right after the events of The Evil of the Daleks arriving on the planet Telos where an archeological expedition is looking into the remains of the Cybermen which disappeared after a series of wars.  The team discovers the entrance to a giant tomb which is set up with logic puzzles so someone very foolish unleashes the Cybermen who are sleeping inside the ice of the planet and because this story takes place on a day ending with a y madman Eric Kleig who had a hand in sponsoring the expedition wakes them up and wants to use them to take over the Earth.  The rest of the story plays out like a base under siege as the Doctor, Jamie and Victoria have to get the Cybermen back into their tombs and escape the planet so the universe can rest easily.  Writing out the plot like this it sounds like it would be boring, but as the story is only four episodes long and the writing is so tight, it doesn’t feel like it drags at all except for Episode 3 which doesn’t have much occurring throughout.  The plot is helped by some great sets that just look and feel metal especially on the monochrome film.  If the Cybermen were to build a tomb this is what it would look like.  The honeycomb tomb itself is a beauty of a creation.  It’s only three stories, but the direction of the story makes it feel bigger as you have actors going right up next to it and several shots from far away.  Mention also has to be made of the music choices for this story as they were all taken from stock sources and the selections chosen from other science fiction which sounds great.

The acting is where many people had a problem with and I have to agree with some of the complaints.  Some of the acting in this story can be really bland with Captain Hopper being a stereotypical American with an actor who obviously wants more to do with the role he was given, but didn’t have it.  There are also a few obvious red shirts in this story who are just boring as you wait for the first cliffhanger to kill them off for good.  Allegations have been made that this story is sexist and racist which I don’t really agree with.  The racist allegations come with the character of Toberman who is black and a servant, but he is meant to be hearing impaired so people have to talk to him slowly so I don’t really see a problem with it except for the unfortunate casting of a black person.

The sexist allegations come against Victoria who is treated like a scared little flower who can’t fend for herself which can be refuted as Deborah Watling has several moments where she is moving the plot along.  Also Victoria is supposed to be a teenager so of course she will be treated like a child as she is only sixteen in these stories. She also gets a great moment with the Doctor where they reminisce about their families which is really good to see as it touches your heartstrings.  Klieg played by George Pastell is one of those over the top character who is just great to see as he has ambitions but is an idiot being strung along by Kaftan his partner in crime who dies in Episode 4 leaving Klieg to act on his own where we get some great scenes of Klieg being an idiot.  The main event of the story is Patrick Troughton and Frazer Hines who are on top form as they are cracking jokes at each other and just having a good time in their roles.  They even integrate Deborah Watling into their fold as they build up a good relationship with the new member of the TARDIS crew.

To summarize, The Tomb of the Cybermen may not be a perfect story as there are some dodgy moments and really dodgy casting choices, but it is still really good.  The plot and a lot of the stories design and direction and acting comes across really well and this thing should be in everyone’s collection.  95/100. 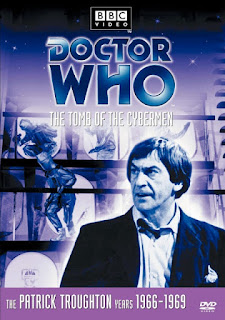