Doctor Who and the Pirates or The Lass That Lost a Sailor by: Jacqueline Rayner directed by: Barnaby Edwards: He is the Very Model of a Gallifreyean Buccaneer


DOCTOR WHO and the Pirates


The Lass That Lost a Sailor 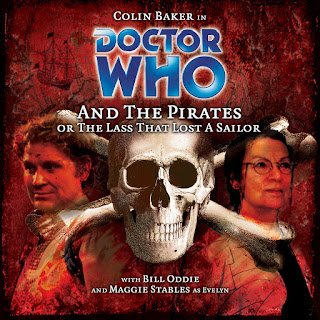 With Orchestration
by
Timothy Sutton

Based off the work
of
William S. Gilbert
and
Arthur Sullivan

With a Full and Efficient Cast


Doctor Who and the Pirates or The Lass That Lost a Sailor is an excellent production from Big Finish and scribe Jacqueline Rayner writes what at first seems to be a rather light hearted fluff, but reveals a dramatic undertones concerning the nature of the story as told from the view of lecturer, Evelyn Smythe and buccaneer the Doctor of the events leading up to the death of cabin boy, Jem.  It is a story being told to student Sally who hides a secret about the death of her boyfriend in an automobile accident.


The production is full of laughs as theatre veteran Colin Baker leads as the Doctor and is at his most theatrical.  His mannerisms will entertain anyone young or old as there is a meat to the performance unlike any other.  The same can be said for relative newcomer to the Big Finish Players Maggie Stables playing the lecturer Evelyn Smythe as she subtly shows the emotions of the last few productions have had on the character which really comes across in the acting.


The music of this performance is all good as Timothy Sutton takes inspiration from two of the greats and all the actors have training for the song.  The lyrics are all humorous and have quite a few portions of puns.  It is Colin Baker, Maggie Stables and Helen Goldwyn who get the best songs as they range from comedic to extremely emotional.  The director allowed for some great set pieces which I love and Rayner writes an excellent script that I can recommend to everyone.