Infinite Requiem by: Daniel Blythe: A Freudian Slip on a Banana Peel 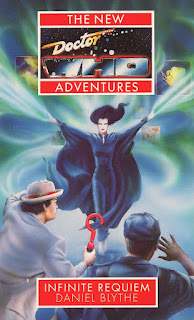 Daniel Blythe’s first novel, The Dimension Riders, was a novel that I didn’t really like as it was a rip off of the already existing story Shada and what original portions it had were really boring.  Today I’m looking at Blythe’s second novel which in all honesty doesn’t fare any better than the first, in fact, I believe it is slightly worse than the first.   Infinite Requiem is a novel that is an original plotline for Blythe as it doesn’t actually rip off any other established Doctor Who stories per say.  The plot starts off doing an homage to Rosemary’s Baby except with the devil being a psychic being and there not really being any horror elements.  These portions of the novel are the most vivid in my mind for the reasons that the homages of the Hinchcliffe/Holmes era stories worked in they had complex characters that helped make everything feel more real.  These portions have some great characters.  This is seen best with Nita and Tilusha.  Tilusha is in the role of Rosemary in the homage, but also is suffering from domestic abuse which her baby actually ends for her, but that isn’t enough to save her life.

These portions of the book eventually move to the far future where the Doctor and Benny meet up with Cheynor from The Dimension Riders where there are three super beings.  Two of them are trying to reunite themselves with each other while the other wants to get rid of the corruption of one of them.  They are the three Sensopaths which are a great idea for villains with a lot of potential.  Kelzen and Shanstra are the foils with Kelzen being rational and nearer to the good side of the spectrum while Shanstra is the exact opposite, serving as our villain for the story.  The third Sensopath is Jirenal who is the most forgettable of the three.  He is I guess the military man so to speak but is just really forgettable.  The final praise I can give to this novel is the Doctor and Benny are the best parts about the plot.  It almost feels like Blythe was trying to reflect Sigmund Freud’s notion of the id, the ego and the superego, but none of it really shows.  The Doctor feels very much like the Doctor.  He has an interactive hologram in the TARDIS and knows that the Zero Room can be instrumental in saving the day.  Benny is also very entertaining in her actions of the novel.

Sadly the rest of the novel is extremely boring and boarders on forgettable.  I finished reading this about ten minutes before writing this review and I’ve already forgotten a lot of the characters.  It’s one thing to be bad but is almost worse to be forgettable.  The characters I actually do remember are very one note.  Cheynor is an alright character I guess, but he barely made an impression as it is.  One thing to note is that Blythe is comparing the characters to music, specifically a requiem and music very similar to Andrew Lloyd Webber’s The Phantom of the Opera.

To summarize, Infinite Requiem, has great ideas for itself to work as a story, but with an author like Daniel Blythe at the helm, the thing really becomes some of the more forgettable Doctor Who.  It acts like it wants to be an experience like The Phantom of the Opera, but as it is a sequel that nobody was asking for and one to a novel that nobody thought was very good in the first place much like The Phantom of the Opera’s sequel Love Never Dies.  25/100.
Jacob Licklider at 9:02 PM
Share